Kids Guide to the Brain Presented 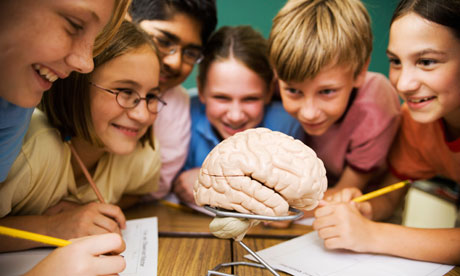 Kids Guide to How the Brain Works

Of all of the body’s organs, none is as important as the brain. The brain is the control center for the body, and it is constantly sending instructions and receiving messages from the body’s organs and tissues – even without your conscious knowledge. Your brain makes everything you do possible, from walking and talking to singing and swimming. To understand how the brain works, it is important to become familiar with the brain’s various parts, how the brain communicates with other body parts, and what happens when the brain becomes injured or fails to work properly.

Parts of the Brain

Just as the heart has several different parts that work together to pump blood, your brain has several different parts that work together as well. Scientists and doctors recognize four basic parts of the brain. The cerebrum is the largest part of the brain and the most obvious component when looking at the entire organ. The cerebrum, which is sometimes called the cortex, is wrinkled so that it has more surface area but does not take up very much space. The cerebrum is responsible for a variety of tasks, including helping you to reason, move, see, plan, speak, and hear. The second part of the brain, the cerebellum, is sometimes called the “little brain,” as it looks like a shrunken version of the entire brain – its surface is even wrinkled, just like the cerebrum. The cerebellum is involved in maintaining posture, balance, and similar functions. The limbic system resides deep inside the brain. Four parts, the thalamus, hypothalamus, amygdala, and hippocampus, comprise the limbic system. The limbic system is often called the “emotional brain,” but it also controls things such as body temperature. Finally, the brain stem, which is the oldest part of the brain in evolutionary terms, connects the brain to the spinal cord.

Communications of the Command Center

The brain receives and sends electrical signals to communicate with the body. While the messages the brain sends are important, the messages the brain receives are just as important; after all, your brain is locked deep inside your skull, and it has no other way to determine what is going on in the outside world. These messages travel through cells called neurons, or nerve cells. These neurons are so important that your body has about 100 billion of them. Neurons connect to each other across a tiny amount of space, called a synapse. Some synapses rely on electricity to transmit information, while others rely on special chemicals called neurotransmitters to carry the message across these gaps. When you touch something that is too hot, the nerves in your hand and arm transmit this message to the brain. The brain then sends a signal back to your hand, telling your hand to stop touching the hot object.

Injuries and Diseases of the Brain

Unfortunately, the brain can sustain injury or illness just as any other organ can. Doctors can treat some of the most common brain problems, but doctors still have not figured out ways to treat others. In some cases, doctors and scientists have learned from people who have lived through traumatic brain injuries. In addition to traumatic injuries, the human brain can sustain damage if a blood clot travels through the blood vessels supplying the brain. In one of these episodes, called a stroke, such blood clots must be dissolved quickly in order to avoid tissue death, as some parts of the brain may be deprived of oxygen. By observing how people act, think, and function after damaging part of their brain, scientists can deduce the types of functions that part of the brain controlled. Other times, uninjured brains may not function properly. For example, the brain may produce the wrong proportions of chemicals, which can cause depression and other mental illnesses. To investigate injuries of chemical imbalances, doctors may draw blood or perform different types of imaging techniques. X-rays, MRIs, and CT scans are some of the imaging techniques doctors use to observe the brain while it is still in the patient’s skull.